Previous Next
For enthusiasts of superhero candor 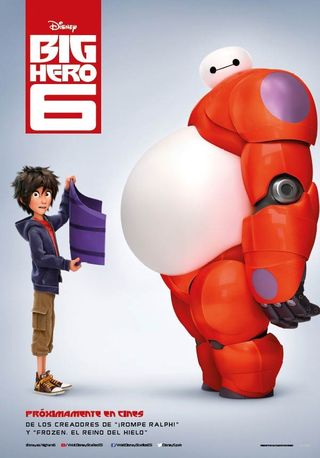 The best: his robot, a prodigy of minimalism.

The worst: that his script plays it safe so much.

North American animation has been nourishing for years on the expressiveness, fluency and kinetic vigor of anime, something like a blood transfusion (or language) to which Disney already timidly pointed out with ‘The Treasure Planet’ (R. Clements & R. Musker, 2002). ‘Big Hero 6’ represents a happy triumph of this creative miscegenation: every corner of its universe, the fruit of a cultural mash-up between the urban areas of Tokyo and San Francisco, breathes thanks to an oriental acceleration of the traditional style of the house. Baymax, the inflatable android that acts as the gravitational center of the function, is the exact point where the eloquence of Hayao Miyazaki and the infinite plastic possibilities of the Genie or Stitch converge. An animated landmark for posterity.

This sparkling and luminous film also symbolizes the first great meeting between Disney and Marvel: nominally based on a minor property of the publisher, ‘Big Hero 6’ adapts all the commonplaces of the traditional superhero origin story to a story of friendship between a depressed child. and lovable mechanical brute. The fund, predictable, never shines as bright as the form, but at least it contains a defense of education as the basis of all personal training that resonates (and how) after fireworks.

Have a good day! See you all soon.

What do you think?

Your password reset link appears to be invalid or expired.

To use social login you have to agree with the storage and handling of your data by this website. %privacy_policy%